You also use dedicated BIG Write pencil; these are special pencils that are only used during BIG writing time I just bought a whole bunch of pencils and put washi tape around them. That's not to say you haven't been doing ANY writing up to now Each Standard sets out a number of criteria against which children are assesed. For example, a 14 on Level 2 might equate to 2. It's suggested you start with one highlighter i. This also gives ALL students the opportunity to TALK about the writing stimulus and hear ideas from others, which is especially important if they weren't able to complete the "talk homework" the night before. The person who did not write the piece of writing has the highlighter, but both people in the pair are responsible for finding the selected VCOP element. It's important they are calm and focused and not rushing in. These are the pencils we use for our BIG write; they are just normal HB pencils wrapped in washi tape.

It's really simple to mark each element; you give a tick for solid evidence or understanding of the skill; a dot for developing and a cross if no evidence shown. That's not to say you haven't been doing ANY writing up to now This is not a sponsored post The person who did not write the piece of writing has the highlighter, but both people in the pair are responsible for finding the selected VCOP element.

All the kids come to the floor with their writing and I select two people to sit in the "Author's Chair" I. These student scales can then be used to assist with goal setting, student reflections and report writing as can the teacher scale, which as I said is the bible for marking writing samples and is a joy to use when writing reports!

They will not have this scale with them when they are writing.

That's not to say you haven't been doing ANY writing up to now Once you have marked their cold writes against the criterion scale, then you can introduce the student-friendly criterion scale I'm really excited about using the student friendly criterion scale; this is the part of the program I am still yet to do, but will be doing next term, even though I've been using the program for almost 18 months! Their highlighted piece of writing should then go somewhere safe. So there you have it! Each Standard sets out a number of criteria against which children are assesed. It's important the kids work as independently as they can and that they don't move around the room, however you can help them and guide them in their writing. In the meantime, I had my kids a few years ago write directly onto the window with liquid chalk, but more recently I have had them use post-it notes when they come across a WOW word or phrase and then stick that to the window. Once you have explored VCOP for around a term, then you teach VCOP alongside completing BIG writes roughly every fortnight, you will be ready to move onto the next stage of the program, which is using the teacher criterion scale to mark and assess student's writing. Having said that, I still have a few elements of the program I have yet to introduce, but will do so next term if I remember, I'll do a Periscope or another blog post about it!

A rather comprehensive review of a comprehensive and brilliant writing program! As a point of reference for my students, I give them the same resources they had on their tables during the BIG Write, which is basically a "placemat" of the 4 VCOP pyramids, so they know which words are considered a connective for example and they then aren't just highlighting random words. 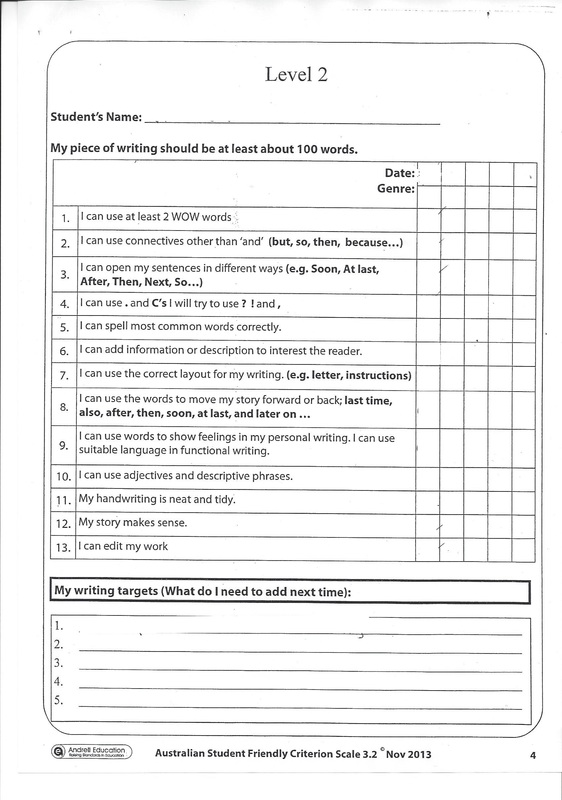 It's suggested you start with one highlighter i. As you explore each element, you will build your display up so that it looks something like this: I like to put the WOW words for Vocabulary onto yellow pieces of paper, then blu-tack them to my window.

Teachers judge the writing against the scale level they feel is most appropriate. You can then set a future goal with the student, which might be something like using at least 3 WOW words in their writing next time.